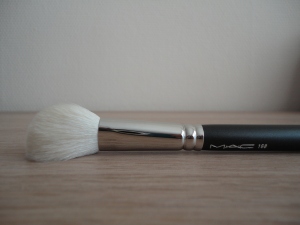 Until very recently I wear almost exclusively eye makeup. I got my first blush (MAC Tea Petal) a couple of months ago, and I’ve been using my fingers to do the application/blending. With that said, I knew (know) almost nothing a about face brushes. All I owned was a miniature generic face brush I got with Clinique loose powder years and years ago (I think the whole pot might still be sitting in my wardrobe back home in Taiwan).

When I found out about contouring however, I knew it was time to get a decent brush. And what makes more sense than an angled contour brush? I visited a couple of different MAC stores/counters in the U.S, bugging SAs into using this on me and showing me how things are done before making the purchase.

The texture of this brush is nice, soft, and dense, which is consistent with my experience with MAC brushes (I own 217, 219, and 239). The shape, as you can see in the pictures, is ideal for making angles or angled lines. I use it for contouring and highlighting, but I’m sure it can be used for powder blushes too. It picks up a decent amount of product, but it doesn’t overdo it so that’s excellent. After all, you can always build things up, but if you overdo it the second you lay the brush on your face you’ll waste a lot of time trying to clean up the mess. It also washes up beautifully, so don’t be intimidated by the white hair!

The only complaint I have so far is that mine sheds a bit. The first time I used it, at least 5 strands of hair came off. I was a bit annoyed, since it has never happened with any of my high-end brushes. The second time, another strand or two came off. I’m hoping whatever should come off has come off now, because if it sheds EVERY TIME I use it, I’m going to be pretty upset (that and I purchased it in the U.S, so there’s no taking it back anywhere). Maybe mine’s defective? From the reviews I’ve read this is a pretty rare problem…

I’ll keep you guys posted about the shedding, but otherwise I’m loving this brush!

EDIT 26/01/12: This brush has shed a couple more hair on me since then, but it has pretty much stopped after a while, and I hope the shedding has come to an end!

OK, fine, one last post before I leave my warm sofa (and snuggie) and get ready for bed, promise!

Since I’ve already sung Sable praises, I feel I’ve got to introduce it’s best friend, the Bobbi Brown Eye Brow Brush. I’d been looking for something like this for a long time. All the brushes I had used for my eyebrows in the past are stupid little things that came with the products themselves. But anyone who wants to do makeup a bit more decently knows (or should know) that the plastic things that come free are usually no better than toys. They are too tiny for any sort of control, and too flimsy to last. I looked into MAC (because Bobbi Brown isn’t available in Belgium. Not for long though! Rumor has it that the first shop will open in Brussels in mid-December. Anyone getting super excited???), but found nothing that would cut it. Some suggest 263, which I had in the past. While it might be good for lining one’s eyes (though I quickly abandoned it when I discovered Bobbi Brown Ultra Fine Liner Brush), the hair is definitely too fine and the brush too thin to do one’s brows properly. I checked makeupalley, but strangely enough this brush has received neither enough reviews nor positive ones there.

I instantly fell in love with it, however, at the Bobbi Brown counter at Macy’s on Herald Square. 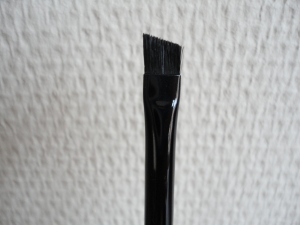 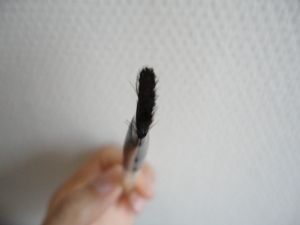 The SA who was helping me was in my imagination a typical New Yorker. She was very antsy, and she kept going in all the wrong directions with the brush when she was trying to do my brows. At some point I had to ask if I could take over and try it for myself, to which she agreed. The brush hair looks long, but it’s definitely stiff enough for precise control. With this brush, you can brush your eyebrow hair in the right places AND fill your eyebrows in at the same time. I don’t know if it’s because I don’t have a lot of eyebrows to being with, but the result I achieve with this brush is so natural that I don’t even need to blend it out with a spoolie. It gets the job done FAST, too! Comparing with all the stupid little brushes I’ve used and have had to waste MINUTES doing my eyebrows in the past, this one saves me SO much time, sweat, and blood!

So again, if you’re unhappy with your eyebrows or your eyebrow brush, check this one out. Of course I understand that not everyone fills theirs in with an eyeshadow and a brush, but if you’re going for a natural, not drawn-in look, the Bobbi Brown Eye Brow Brush and a shadow matching your hair color would be a pretty good bet!

Now I’m officially going to turn my computer off for the day. I’m the only one who is still awake in the house!

PS: According to StyleLab, a Belgian fashion/beauty blog, Bobbi Brown is opening on December 16th at 11A, Rue A. Orts, 1000 Brussels. It’s very close to the stock exchange, right next to Cosmeticary where you can find brands such as OPI, By Terry, Bumble and Bumble in Belgium. I’ve walked past by the location in early November, and I can confirm the window is covered with black plastic staying Bobbi Brown Coming Soon!