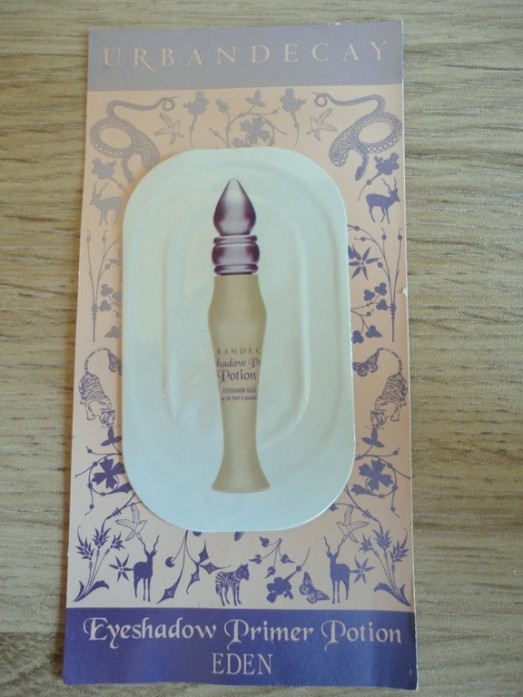 Hello everybody! Aren’t you happy it’s Wednesday? Before you know it, the week is already halfway through! I hope your week has been a breeze!

I received a sample of Primer Potion in Eden with an Urban Decay order quite a while ago, and I’ve been meaning to try it out. I finally did the other day when I was wearing glasses (if you read on you’ll know why it turned out to be a lucky decision), so I’m going to share my experience as well as some swatches. I’m also including comparison swatches with the original Primer Potion so you can see how they are different.

As you can see in the swatch photo (a heavy swatch on the left and sheered out on the right), Eden is yellowish. It is almost the color you would expect from a foundation. For my NC30 skin, even when it is sheered out, it is visibly lighter than my skin tone. I personally use eyeshadow primers on my lids, all the way to my brow bones, in my inner corners, and on my lower lash line. With Eden, it is pretty obvious that the skin around my eyes is lighter than the rest of my face, and it doesn’t look natural at all. It was a lucky coincidence that I decided to wear my glasses that day. My glasses are photochromic (they become darker in the sun), so they normally have a slight gray tint and tend to make my eye area a little darker, which Eden balanced out. I would not have gone out of the door with Eden on my eyelids otherwise.

The texture of Eden is pretty thick, and it takes some effort to smooth it out. I also found the texture a bit dry, and it could look cakey if you are not careful. The back of the sample claims Eden can “replace your brow bone highlighter entirely”, but there is a difference between a lighter skin tone and the glow that I want from a brow bone highlighter. Unfortunately Eden doesn’t belong to the latter. It also claims to provide “matte, neutral-hued coverage” when worn alone. While it functions as a concealer, I find the color ashen, dull, and doesn’t match my skin tone. I am also not a fan of having to rub it so hard because the texture is dry. On top of that, the mascara on my lower lashes smudged after several hours, and that was disappointing.

In terms of a primer, I find the performance equal to the original. I only tried it once and not over very long hours, but from my experience my eyeshadows didn’t crease.

In this photo, you can see the comparison between Eden (on the left) and Original (on the right). I swatched Buck, Half Baked, Sin, and Naked from the Naked Palette for demonstration. I would say that Eden makes eyeshadows more intense, especially the matte ones. However, it also somehow changes the colors a little. I experienced that with Sin, which takes on a grayish tinge over Eden, and I wasn’t particularly keen on that.

Bottom line: If you normally use a base (say MAC Soft Ochre), you might find a replacement in Eden. However, for the majority of us, Eden is not going to suit our skin tone to a T. If you are looking for something that you can use all over your eyes, Eden might not be your thing. Also, texture-wise I find Eden a flop. Nobody should have to tug on their delicate eye area just to smooth a primer out!