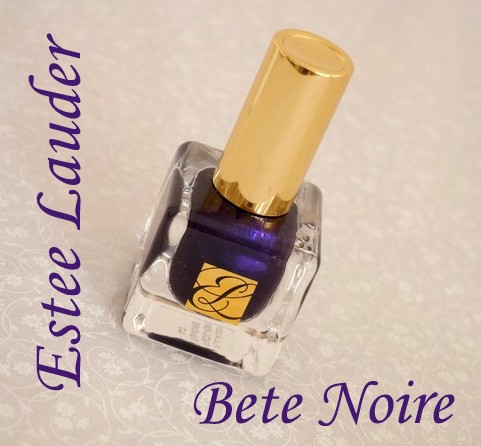 For fall 2012, Estee Lauder brings out two limited collections of nail polishes. The inspiration behind Beyond Black and Metal Mania is Paris by night. If you’re interested in how the shades came about, you can take a look at this clip. Apparently the purples are based on French pâtisserie. Out of the 10 limited edition shades, only the blurple Bête Noire will make it into the permanent line-up, and today I have the swatch/comparison for you!

Estee Lauder Nail Lacquers are house in a transparent cube with the nail polish looking as if it were suspended in the middle. The golden cap is long and thin. The packaging might be a bit chunkier than necessarily, but it’s rather unique. 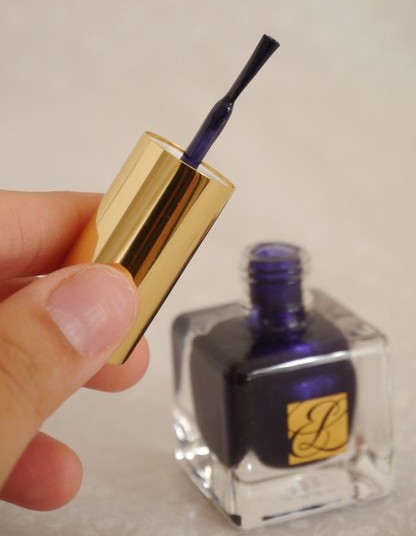 I find the brush easy enough to use. It is flat but on the wide side, and it is not so long that it’s hard to control where it’s going. 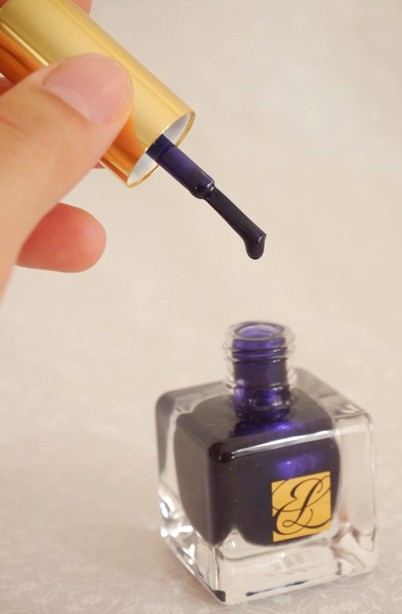 Bête Noire is, in short, a blurple with amazing multi-chrome shimmer. The consistency is on the thinner side, so I have to pay more attention for it not to pool around the cuticle. The first coat is thin and streaky, but it’s perfection after 2 coats. It’s fully opaque and not streaky at all! The wear is more impressive than most nail polishes I own. I wore it for 4 days with minimal tip wear and nary a chip, which is definitely better than the grand majority of nail polishes I have tried!

Now let’s see it in action! 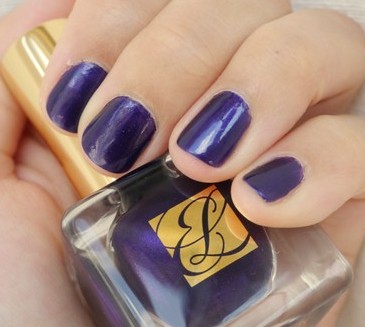 In sunlight so you see the shimmer: 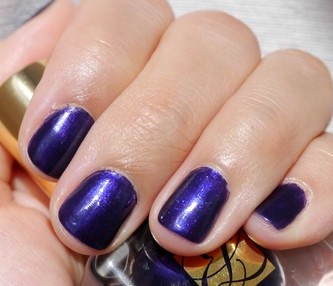 Since I’ve been a big fan of blurples, I took some similar shades out, but nothing turned out even close at all!

Bottom line: If you’re a fan of blurple, definitely check this one out! The finish and wear of this nail polish are above average, though you might have to be a little more careful with the thinner consistency! I’ve seen the others in these collections, and I would really urge you to look into them!

Since we’re talking about nails, remember how a while back I told you I was on the Oenobiol Hair and Nails supplement?

I finished it a bit more than a month ago, and to a certain extent it did work. The peeling did stop at the end, and lasted for a while after the treatment was finished, but then it kind of came back. It is much better now than before, though I think in my case I might need stay on a supplement like this (usually you take it for 3 months, and then you’re good for 3 months). It really is a hereditary condition that has been worsened by the climate and so on. I am otherwise healthy, and my hair doesn’t need too much help either. It’s really just my nails!

For those of you who might be interested, the Oenobiol Hair and Nails treatment is something you have to take 2 tablets of per day. I would strongly advise you to wash it down with some food. It is high on vitamin B’s, which means it could be hard on your stomach. The couple of times I was naive enough to think I could get away with a glass of juice can only be described as near-death experience (I quickly ate something and the nausea subsided fast enough).

Are you digging Estee Lauder Bête Noire or anything from the new collections? Act fast because I think most of them will be sold out fast enough!

PS: Beyond Black and Metal Mania (excluding Bête Noire) is only available at Inno Rue Neuve in Belgium, for those of you local ladies who are interested.

Disclosure: The products mentioned in this review are provided by the PR for my consideration. All opinions are honest and my own. I am in no way compensated for this review. I have always been, and will always be committed ONLY to my readers.